The social media world is constantly inundated with new apps and platforms that either get swallowed by major players, fail or continue to see growth. One platform that’s here to stay is Instagram—the Facebook-owned platform, which hit 400 million monthly active users, making it larger than its rival Twitter.

As this platform continues its growth, Development Counsellors International is often asked if it’s an effective platform for economic development organizations (EDOs).

We’ve witnessed a mix of EDOs testing out Instagram, but the most successful accounts stem from those that have a strategy. In particular, talent attraction-related Instagram accounts tend to really hit a home run in the digital sphere.

Millennials (a key audience in attracting talent) are tech geeks who gravitate toward sharing their experiences and ideas via visual mediums. Visually oriented sites and platforms are now outpacing other networks, and it’s a good cue for EDOs looking to attract relocating young professionals to hop on the bandwagon.

Below are three tactics for economic development marketers to keep in mind when captivating young professionals on Instagram: What better way to showcase life in a community than to see it through the lens of a local? A few talent attraction initiatives have handed over the reins to their communities’ biggest fans, allowing locals, influencers and businesses to take over Instagram accounts for a set period of time.

Take note of  Anchorage Economic Development Corporation’s “I Love Anchorage” Instagram account, which won a gold IEDC award in 2014 for the initiative. Every Monday and Thursday, a different Anchorage resident is given control of the account and posts photos of how they’re living, working and playing in Anchorage. Today, the account boasts more than 8,500+ followers, ranging beyond Alaska’s borders.

Calgary Economic Development also does a great job of leveraging the power of influential residents and businesses. Their “Life in Calgary” Instagram account, which is a component of their “Calgary. Be Part of The Energy” campaign, gives users an inside look into some of the city’s most trendy restaurants, shops, attractions, outdoor amenities and events. 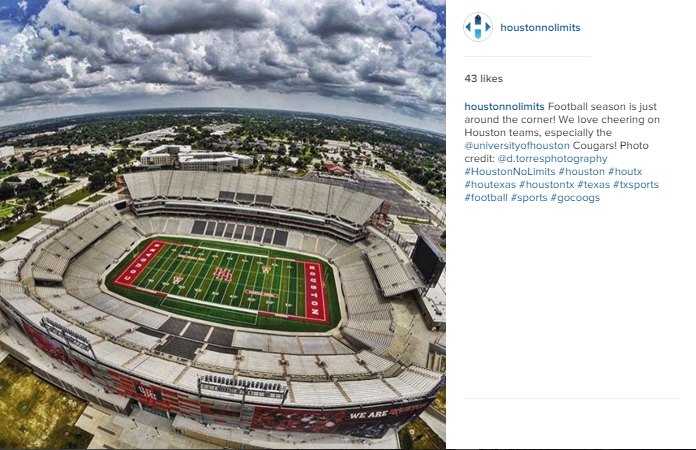 According to Buffer, and contrary to other social media platforms, engagement is highest on Instagram posts with 11+ hashtags. That said, use hashtags strategically (make sure the hashtags are relevant to young professionals and your city) but don’t be afraid to add more hashtags than you would on other channels. Adding more hashtags on Instagram improves the chance to connect with more of your key audience.

The Greater Houston Partnership’s hashtag game is on point. Their “Houston No Limits” Instagram account successfully features the city as a hotbed for opportunity, while using hashtags that relate to their talent campaign (#HoustonNoLimits). There are many ways to connect with your followers on Instagram, but a great way to really ramp up engagement and follower growth is to feature and repost photos using your campaign’s hashtag. Bringing outside contributors to your Instagram feed can broaden your influence and show the world that you care about the people in your community.

Last year, the New York Econoimc Development Corporation (NYCEDC) collaborated with BigApps to take their engagement to another level by asking people who live and work in the city to imagine their visions of New York City in the future, using the #FutureNYC hashtag. During NYCEDC events, attendees were given markers and blank slates to showcase their answers about the city’s visions, sparking a digital dialogue. Creative submissions received a special shout-out on their social media accounts, including Instagram.

One-thousand miles from NYC, the Greater Des Moines Partnership also realizes that their talent attraction initiative, CarpeDM Seize Des Moines, isn’t successful without involvement from their community. A majority of their Instagram photos are taken by followers who use the hashtag #SeizeDesMoines.