After walking the entire floor twice and speaking with more than 60 destination exhibitors at IMEX America this year — a near-even split between international and domestic destination marketing professionals — one thing is clear: Although this business event tallied the largest number of attendees to date, pre-booked, qualified appointments were not as plentiful as previous years.

With the cost to participate in IMEX continuing to climb, destination marketing organizations (DMOs) have tapped the creative minds of their tourism marketing departments to help create the most intriguing booths, designed to lure meeting planners who are “just passing by” on their way to another appointment.

We know coffee and alcohol are always alluring. Truthfully, if you had a cocktail at every booth that offered one at IMEX America, you’d probably pass out before reaching the D row. However, those destinations exhibiting a unique approach to engaging delegates were rewarded with foot traffic.

Here’s our take on the best booth-engagement techniques at IMEX American in 2017.

Tacoma Gets Buyers to Air Their Thoughts

Look at Tacoma, Wash. It had only eight appointments on the books when it arrived, but its innovative “oxygen bar” drew more than 200 additional buyers to the booth. (Let’s face it: After a night out in Las Vegas, all of us could use more oxygen.) “On average, I had a chance to speak with each buyer for five minutes, and it directly resulted in RFPs that I never would have known about without this activation,” said Chelene Potvin-Bird, vice president of sales and servicing, Travel Tacoma and Pierce County. The social media call to action helped propel conversations even further in the social space. Visit Reno Tahoe went “old school” with an actual museum-style diorama, which helped buyers understand the landscape/layout of Reno, its proximity to the outdoors and the rise of a major tech sector in the city (which provides conventions with potential speakers and delegates for these types of conventions). During my 15 minutes at the booth, more than 20 buyers stopped by to look at and engage with the DMO. “This approach has been so effective that we had to encase our exhibit in plastic to keep buyers from engaging a bit too much,” said Nathan Fillion, national convention sales manager, Visit Reno Tahoe. That’s success. Destinations seeking to sell their cultural connections benefitted from extended reach on social platforms, as selfies galore were shot. We watched the tango dancers of Argentina National Institute of Tourism Promotion, the Kava Ceremony and Bula Warrior Welcome at Tourism Fiji and the sumo demonstration at Japan National Tourism Organization. 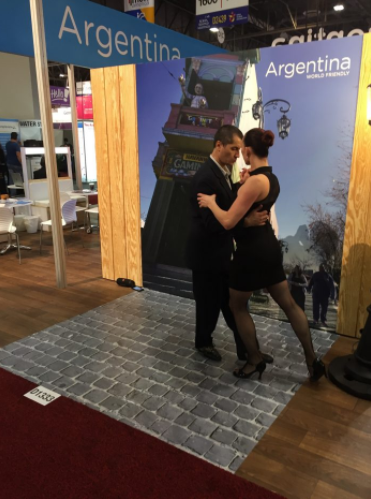 The Kava Ceremony and Bula Warrior Welcome at Tourism Fiji Bike giveaways were trending, with Alabama Tourism Department, Tourism Ireland, Santa Monica Travel & Tourism (state, country and city) and other booths engaging buyers with a chance to take home a bike (that they probably wished they could use to navigate the floor of the Sands Expo). The Dish of Culinary Engagement

In the food category, we’ll give a shout out to Destination DC’s cappuccino artist, who re-created the image of buyers in their cup ‘d joe, which was so beautiful that people refrained from drinking it. The image was more creative but less long-lasting than the London & Partners caricature artist. In hindsight, we wish we could have seen these two artists face-off head to head. The sweet scent of steaks wafted from Visit Omaha in the morning. Attendees needing a hearty start after a late night of networking in Las Vegas lined right up. We know it takes more than just a great booth to win business, but these innovators certainly made the most of the stage. Your travel PR counterparts should be proud.

Did you see other booths that caught your attention? Tweet us a photo @aboutdci.

« The 7 Do’s and Don’ts of Effective Twitter Chats
Episode 31: Alabama Bets the Farm on Mercedes-Benz (and Wins) »