During a recent “agency exchange” in London to learn best practices from integrated marketing firm, Black Diamond, DCI staffers Ally Carlson and Rebecca Gehman also had the opportunity to attend World Travel Market—one of the biggest events in the world for the travel industry.

With upwards of 10,000 attendees and 5,000 exhibitors from 182 countries and regions (some with million-dollar booth displays), World Trade Market is truly a sink or swim situation for destination brands.

While it may seem that making a big splash at a trade show of this size is simply of matter “who can spend the most dollars,” there are a few simple common-sense strategies that can make you stand out. Because remember: “big splash” does not always equal “big success.” DO: FOCUS ON QUALITY VISITS THAT GIVE A FULL EXPERIENCE

Instead of just putting on a grand show to garner glances at your booth, create a full-circle experience that draws people in and doesn’t let them go.

For example, the Costa Rica booth first drew us in with a great photo opp. They gave us props that showed their hashtag. Then, if we shared the photo on social media with the hashtag, we earned a free printed photo. While inside the booth waiting for the photo to print, we were offered custom Costa Rican beverages and were chatted up by the booth staff on what’s great about Costa Rica. Oh, and there was a designated staffer who guided us through this entire process. There was no guess work and it was a genuine experience that left us wanting to learn more.

DON’T: GIVE SWAG JUST TO GIVE SWAG

DO: GIVE SWAG THEY’LL REMEMBER

Think of the best gift you’ve ever gotten. I’m guessing it wasn’t a keychain or a pen. Chances are some of the best gifts you’ve ever received were great because they were memorable—they had meaning. If you’re going to give swag, don’t give something that no one really wants to get. And even more importantly, don’t give something that doesn’t mean anything. We saw all too many booths giving out generic coffee, chocolate, tech products, etc.—that had no messaging or tie-in back to the brand that was giving them out. That’s money down the drain!

One booth that really stood out for a gift that was both meaningful and memorable (and educational) was Visit Korea. They had a painter who was taking the names of visitors and “live” painting their names on beautiful posters in the Korean language.

As you watched the painter do his work, a staffer explained the intricacies of the Korean language and answered any questions you had about the country. When finished, the product was safely wrapped for you to take home. Click here to see Korea’s gift in action here.

Another great part about this gift? It was so lightweight and thin that it could easily fit in our bags home. Many gifts given out at the trade show were too bulky or heavy to pack-up and bring back in a suitcase. 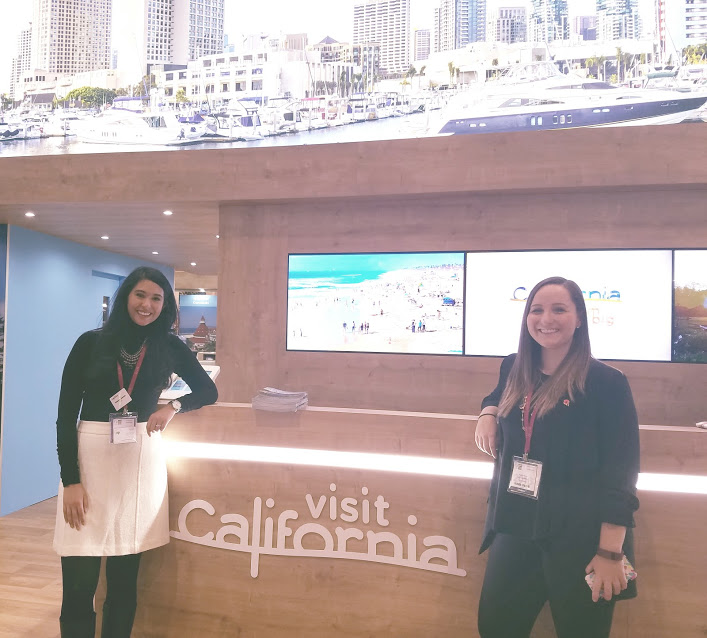 DO: SPEND WISELY BASED ON YOUR GOALS

Before you even plan to attend a trade show, you should first think of your goal. Is it general brand awareness? Then you may want to go big. Is it to foster relationships you already have? Then you may be able to pull back.

There were plenty of trade show booths with big and showy displays and yet no one actually inside their booth.

An example of a brand that knew their goal and stuck to it is Visit California. While their booth was beautiful, it was half the size of some other exhibitors. Plus, there were no gimmicks to draw people in or free giveaways that many of the other booths had. And yet, at any given hour throughout the day, their booth was buzzing with people and excitement. When we asked Black Diamond Managing Director Guy Chambers for his take on Visit California’s trade show success, he said that because Visit California is such a well-known brand already, there is no need to spend thousands just to get “the word out.” Instead, they are focusing on quality meetings with new contacts and building existing relationships. Gimmicks and giveaways would not have fit that goal.

In short, if your goal is brand awareness, you’re going to need the big bucks. If your goal is more targeted than that, give up the gimmicks and focus on results. What trade show trends have you seen that are a “do” or a “don’t”? Let us know in a comment below or tweet us at @aboutdci.